by juyas
in Point de vue
0 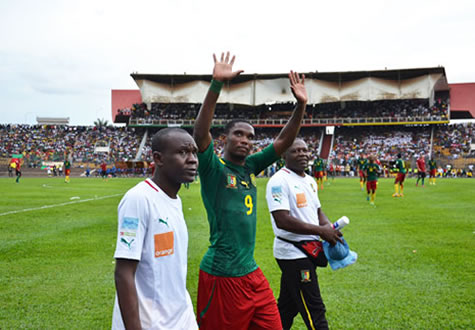 As he waived at the terraces of Mfandena last Sunday afternoon, Mr. Eto’o’s sombre demeanour was ominous of bad tidings. The captain, it was soon revealed, was calling it quits. Uncharacteristically, Mr. Eto’o chose to tip-toe out of the national side with a fair measure of dignity and restrain, sparing us the usual shenanigans and the temper tantrums we have come to dread so greatly the past few years. The exit was arguably a class act.

No matter how or from whichever angle you look at the relationship between Mr. Eto’o and the fans, on one hand, and between him and the players and the football governing authorities on the other, it was at best a love-hate affair fuelled by misunderstandings, deception and a sense of unfairness. The souring situation was getting unmanageable and it finally got to the skipper.

To look somewhere else in search of a substantive reason for Mr. Eto’o’s exit would be something of a humbug. It is ludicrous to argue that some lowly scribes in the media did chase Mr. Eto’o away from football on our side. True, we were at loggerheads now and then; we were at times at each other’s throat; and occasionally, the odd argy-bargy turned nasty between him and us. Football is an elbows-up world. He knows that. But whatever was thrown at him was commensurate with his status as the best and brightest on our side. Mr. Eto’o, granted, was far more chastised than Mr. Landry Nguemo. That goes with the territory, doesn’t it?

Maybe what he gave was all he had to give. But we came asking for more because we felt he had all it took to deliver. Sure, he did us proud and helped solidify our reputation long and wide. We never failed to acknowledge that. But we never failed either to remind him, in no uncertain terms most of the time, that he was expected to take us higher, to make his teammates better and above all, to help us establish a more favourable “rapport de force” on governance with the Fecafoot and the sports ministry generally.

Should we feel devastated or relieved now that our skipper has turned his back on us? None of that, of course. We are going to miss him and I know he will miss us. We are certainly saddened by the feeling that the gem of purest ray Mr. Eto’o was is fading away with a decidedly mixed record. I was fortunate enough to have witnessed this lad flower into a very fine footballer indeed. I have witnessed his generosity and goodwill; I can attest to his staunch loyalty towards friends and family. But that should be that; the show must go on. Now that we find ourselves in the same shoes as Emperor Titus sending Queen Berenice away from Rome, we do part with Mr. Eto’o in spite of ourselves and in spite of himself.