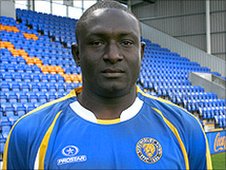 Boro have not disclosed the length of the former Bristol City, Cheltenham and Shrewsbury forward’s contract.

The 26-year-old has spent the last two years playing in China and Albania after being released by the Shrews in 2008.

“Guy is yet another player with unfulfilled potential,” Boro boss Graham Westley told the club website.

“He is quick, strong and has a great eye for goal, he complements the other strikers already at the club and is sure to improve by working alongside them.

“He has it all to do but I am sure he will go on to prove he is worth the confidence I have put in him.”

After starting his career at non-league Petersfield Town, where he scored 12 goals in 11 games, Madjo was snapped up by Bristol City.

He made just six appearances for the Robins before switching to Forest Green, initially on loan but then permanently in 2006.

Spells at Stafford Rangers and Crawley followed before Shrewsbury paid £20,000 for his services in early 2008, with a return of three goals in 15 games.