Samuel Eto’o scores twice as Barcelona continues to shine, while Douala scores his first with Sporting in SuperLiga 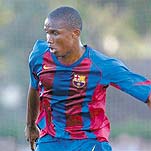 Samuel Eto’o’s two goals was the biggest story amongst Cameroon’s players this week in Europe but there also were noteworthy contributions by Rudolph Douala and Parfait Ngon. Also nice to know that; making his league debut alongside Kalla in Bochum’s central defense was a German born defender named Marvin Job Matip. The young U-19 german international is of cameroonian descent by his father.

Samuel Eto’o scored twice as Barcelona continued their great start in La Liga with a 3-0 win over Osasuna. Eto’o’s goals in the 41st and 93rd minutes took his league tally to 7, making him the top scorer so far in Spain. With Ludovic Giuly’s return, Frank Rijkaard dropped Henrik Larsson and played Eto’o as the lone striker and he seems to play better there than he does

when he is shifted out left. Eto’o’s first goal came as Ronaldinho chipped a ball forward to him on the left side of the penalty box. While the ball was bouncing hip high, Eto’o, in full stride, volleyed it in to the far post. A very well struck goal. After scoring he ran over to the corner flag and did a dance ala Roger Milla!

His second goal in the final minute of the game came as he dribbled into the box juking his way past several defenders, he passed to Andres Iniesta near the penalty spot, ran behind Iniesta and took the return pass, skipped by another defender and fired into the net. A very good individual goal.

With Savo Milosevic’s injury, Pierre Webo started at forward for Osasuna. He had a good opportunty early in the match when he received the ball on the right side of the area but his shot was tipped away by Barcelona’s goalkeeper. After that Webo was pretty quiet and was subbed out in the 53rd minute.

Carlos Kameni was in goal as Espanyol defeated newly promoted Levante 3-0. Espanyol’s defense made life pretty easy in this game for Kameni who had little to do in the win.

In Portugal, Rudolph Douala scored his first goal as a Sporting Lisbon player as his club defeated Belenenses 2-0. Douala started at forward and later was shifted out to right wing and scored in the 87th minute when he received a through ball and was in alone on the opposing keeper. For the 2nd consecutive week, Douala was voted the man of the match for Sporting. Albert Meyong also had a solid game before he was subbed out in the 76th minute as Vitoria Setubal defeated Sporting Braga 3-2. Yohanna Buba was at centerback for Estoril in his club’s scoreless draw with Boavista. William Andem’s recovery from injury is taking a bit longer than expected and he did not play for Boavista.

Rigobert Song in central defensee and Alioum Saidou in central midfield started as Galatasaray defeated Trabzonspor 1-0. Saidou was replaced in the 62nd minute of his club’s victory. The win allowed Galatasaray to leap past Trabzonspor into second place in the Turkish league. Elsewhere in Turkey, Herve Zengue was in midfield for Ankaragucu in their 4-1 loss to Besiktas and Claude Bakadal was at forward for Sebatspor in their loss by the identical score to Kayserispor. Souleymanou Hamidou was in goal for Denizlispor in their 2-0 loss to Rizespor.

Pierre Ebede had a strong game, making six saves, as Chalkidona held Champions League participants Olympiakos to a 1-1 draw in Greece. The only goal conceded by Ebede was via an own goal. Jean Denis Ouanga came on as a sub in midfield in the 76th minute of Kallithea 4-1 loss to AEK Athens.

Lauren was the only Lion to have played this weekend in the English Premier League. He gave his usual strong performance at right back for Arsenal in their big matchup against Manchester United. Arsenal’s 49 match unbeaten streak in the league ended as Manchester United won 2-0. Lauren was caught moving forward looking for the tying goal late in the match and was late getting back to cover Wayne Rooney who tapped in Manchester United’s 2nd goal on a counter attack. But other than that slip up, he completely controlled Manchester United’s opposing left winger Ryan Giggs.

In the Championship, over the weekend Franco-Cameroonain Mathias Doumbe was at centerback for Plymouth in their 2-1 loss to Sheffield United. Serge Branco receievd his first start in midfield for QPR in their 2-1 loss to Wolverhampton and Patrick Suffo entered as a sub in the 86th minute of Coventry City’s 4-1 loss to Wigan. Midweek, Cameroon’s players were more successful as Mathias Doumbe Kouoh scored the only goal of the match in Plymouth’s win over Rotherham. In the 65th minute he tapped in a loose ball after a free kick. Patrick Suffo entered as a sub at forward in the 76th minute of Coventry City’s 2-2 draw with Burnley.

Cameroon’s top performer in France’s Ligue 1 this week may have been 17 year old Alexandre Song who came on as a sub in the 29th minute and proceeded to give a strong display for Bastia in his club’s 1-1 draw with Sochaux. Modeste Mbami also played well in midfield for PSG in their 1-0 win over Ajaccio. Benoit Assou Ekotto had a pretty good match at left back for Lens in their scoreless draw with Marseille and starting for the 2nd consecutive week at right back for Istres was Patrick Leugueun (0-0 vs Lyon).

There were several matches which had Cameroonians playing on competing teams. Rennes 3-1 win over Metz saw Jean Joel Perrier Doumbe give a solid display at right back for the victors while Herve Tum started at forward for Metz. This was not one of Tum’s better matches and he was subbed out in the 85th minute. Toulouse’s 1-0 win over Lille had 4 Cameroonians in action. Henri Bedimo Nsame started in midfield for Toulouse but was replaced at the start of the second half by countryman Achille Emana who went on to have a pretty good match. For Lille, Benoit Angbwa (right back) and Jean Makoun (midfield) both played strong matches in their club’s losing effort.

In Ligue 2, Martin Ekani gave a good performance for Angers as his club defeated Reims 3-0. Thierry Gathuessi returned to Montpellier’s lineup as a central defender and his club also won over the weekend 3-0 against LeHavre. Also starting this weekend in Ligue 2 were Gilbert Bayiha (goalkeeper) and Bertin Tokene (centerback) as their club Grenoble drew 1-1 with Chateauroux; Alexis Ngambi at centerback for Gueugnon (0-0 vs Dijon); Eugene Ekobo in midfield for Creteil (1-3 vs Lorient); and Stephane Biakolo at forward for Niort (0-1 vs Laval). Marcus Mokake came on as a substitute at forward in the 59th minute for Sedan in his club’s 0-0 draw with Brest.

Raymond Kalla was the only Cameroonian who played this week in the Bundesliga. Unfortunately he and his club Bochum continued their struggle as they were beaten 3-0 by Wolfsburg. Bochum are now 2nd from bottom in the league only ahead of Kaiserslautern on goal differential. Making his league debut alongside Kalla in Bochum’s central defense was a German born defender named Marvin Job Matip whom we believe is of Cameroonian descent. Matip recently turned 19 and is a member of Germany’s U-20 team so we won’t be including him in our weekly updates in the future but wanted to let our readers know of another player with Cameroonian roots in Europe.

In Bundesliga 2, Daniel Wansi had a good outing at right side midfield for Dynamo Dresden in their 2-0 loss to RW Oberhausen. Francis Kioyo also played well for Rot Weiss Essen in their 2-2 draw with FC Koln.

In Belgium, Eric Matoukou (centerback) and Justice Wamfor (midfielder) started for Racing Genk against Anderlecht. Matoukou received a yellow card in the 20th minute and was sent off with his second yellow in the 24th for bringing Aruna Dindane down as he was breaking towards goal. Even though they played 65 minutes down a man, Genk entered the last 10 minutes up 2-1 against Anderlecht before Anderlecht scored three late goals to win 4-2.

Elsewhere in Belgium, Patrice Noukeu started at midfield for Mouscron in their 1-0 win over Westerlo, Matthieu Assou Ekotto also played at midfield for La Louviere as his club lost 2-0 to league leaders FC Bruges. Aloys Nong entered as a sub at forward in the 49th minute for FC Brussels as his club lost 2-0 to St. Trond. Guy Bertrand Mamoun of St. Trond has finally recovered from his injury and has been sent down to his club’s reserve side. It is not yet known if that is so he can regain his fitness and form after his injury or because the club feels the 20 year old Mamoun is not yet ready to play in the Belgian Jupiler League.

Elsewhere in Europe the most noteworthy accomplishment was the 2 goals scored by Parfait Ngon in Latvia as his club FK Riga lost 4-2 to crosstown rivals Skonto Riga. Ngon started at right side midfield and scored his goals in the 27th and 68th minutes. Playing centerback for the victorious Skonto Riga was fellow Cameroonian Aaron Nguimbat. In Russia, Jerry Christian Tchuisse was at centerback for FK Moscow as his club lost 2-1 to Kryilya Sovetov. In Ukraine, Ernest Siankam entered as a sub in midfield in the 72nd minute as his club Volyn Lutsk defeated Arsenal Kyiv. Elsewhere in Eastern Europe, Patrice Abanda again played well at centerback for Drnovice as his club beat Pribram 2-1 in the Czech Republic. Pierre Boya started at forward for Partizan Belgarde as his club defeated OFK Belgrade 2-0 in Serbia & Montenegro.

In Sweden the penultimate round of matches were played and Malmo eliminated IFK Goteborg from the title chase with a 2-1 win. Jospeh Elanga started at left back for Malmo and Patrice Kwedi came on as a sub for IFK Goteborg in the 72nd minute. Malmo currently trails Halmstads on goal difference (by 4 goals) and next week in the final week of play Malmo hosts Elfsborg while Halmstads is at home versus Goteborg.

In Switzerland it was Cup weekend and Augustine Simo started in midfield as Aarau beat Lugano on penalties; Armand Deumi played the first half at centerback as Thun easily beat Manongex 8-0; Jean Michel Tchouga scored a goal as Luzerne beat Wintherthur 3-1; Jean Francois Bell was in defense for Bellinzona in their penalty win over Grasshoppers Zurich; and Achille Njanke was at forward for Meyrin who lost 3-1 to Basel.

A left foot shot for his first goal last sunday against Osasuna.

Marvin Job Matip: 1.83m, 80Kg, 1985. Born from cameroonian father, Marvin is JD Job cousin. Coming soon with more about this young player whose try to play for cameroon before choose Germany U-19.