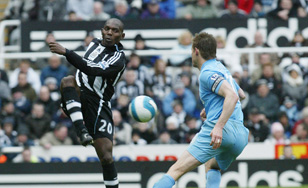 Geremi’s impressive display in Newcastle United’s 2-0 home win over Fulham earned him a place in the Team of the Week in The Actim Index, the official player ratings system of the Barclays Premier League.

The Cameroon international posted a season’s-best 36 points as manager Kevin Keegan earned his first win since returning to St James’ Park, assisting in both goals scored by Mark Viduka and Michael Owen.

Geremi also produced 15 passes, two dribbles and eight crosses as he moved 37 places to 184th in the Index with 174 points.

The Magpies, six points clear of the relegation zone, have one player in the top 100 – defender Steven Taylor is 92nd with 262 points.

Analysis of all Premier League games is taking place throughout the season and the players in the Actim Index Team of the Week are:

The Actim Index is calculated using a unique mathematical formula that rates each player’s contribution be it goals, shots, passes, dribbles, tackles, crosses, saves, clearances, blocks, interceptions, assists, clean sheets, time on the pitch or number of points gained by the team with marks deducted for red and yellow cards.