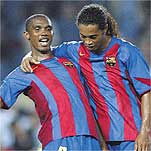 Making the headlines this week are Samuel Eto’o in Spain, Joseph Elanga in Sweden and Valery Mezague in England. It was generally a quiet week for Cameroon’s players in France, while in Portugal, Rudolph Douala and Sporting Lisbon continued their climb up the league table with a 3-0 win over Penafiel.This week’s results of Cameroon’s players in Europe…

Samuel Eto’o continues scoring for Barcelona. He netted his 8th goal of the league season in Barcelona’s 1-1 draw at Athletic Bilbao. In the 11th minute Eto’o receievd a cross from the right which just barely cleared the head of an Athletic defender. Eto’o trapped the ball with his foot, it rebounded off the defender and fell perfectly for Eto’o to hook into the opposite corner of the goal. This is the best goal scoring start to a league season for a Barcelona player since Ronaldo in the 1996-7 season. And yesterday, Eto’o help his club to beat Milan (2-1) in Champions league. Running onto the penalty spot, the African footballer of the year hit the ball into the roof of the net (1-1). Latter in the match (88th), Eto’o gives a pass to Ronaldhino for the winning goal for Barca.

Carlos Kameni also had a good outing as he helepd Espanyol in their 0-0 draw with Villarreal. In the first half, Kameni was forced to make several nice saves which kept Villarreal off the scoresheet. Once again he showed his agility and athleticism in goal.

In midweek Spain’s clubs played in the Copa del Rey (King’s Cup). Eto’o came on as a sub in the 73rd minute as Barcelona, using many reserves, was shockingly defeated by 3rd Division Gramenelet 1-0. Carlos Kameni was rested by Espanyol. Daniel Kome entered as a sub in midfield in the 2nd half of Getafe’s 1-0 win over 2nd Division Las Palmas.

Rudolph Douala and Sporting Lisbon continued their climb up the league table with a 3-0 win over Penafiel. Douala started at forward and had a good first half before losing some effectiveness in the 2nd. He ended up being subbed out in the 84th minute. Centerback Yohanna Buba of Estoril had quite possibly his best match of the season as his club defeated Beira Mar 5-0. Buba helped anchor the Estoril defense which completely controlled Beira Mar’s atatckers. Albert Meyong started at forward as Vitoria Setubal took over first place in Portugal with a 1-0 win over Vitoria Guimaraes. Meyong was subbed out in the 68th minute of the match..

This weekend in England saw Valery Mezague make his league debut with Portsmouth in the English Premier League. Mezague, who is on loan this season from Montpellier in France, came on as a sub in midfield at the start of the second half and helped his club upset Manchester United 2-0. Mezague received good marks from the British press for his play. Joseph Desire Job also came on as a sub in the 79th minute of his club Middlesbrough’s 2-1 win over Charlton. Lauren was at right back for Arsenal in their 2-2 draw with Southampton.

In the Championship (effectively the Second Division), Matthias Doumbe started in central defense for Plymouth in their 1-1 tie with West Ham. Serge Branco started at midfield for QPR, before being substituted in the 68th minute, of his club’s 3-0 win over Burnley. Forward Patrick Suffo entered Coventry City’s 3-2 win over Reading at the start of the 2nd half.

Midweek, in the League Cup, Mezague started in midfield for Portsmouth in their 2-1 win over Leeds United. Mezague was fouled inside the penalty area which led to his club’s first goal. Eric Djemba Djemba received a surprise start at right back for Manchester United in his club’s 3-0 win over Crewe. Geremi started in midfield for Chelsea as they defeated West Ham 1-0. In Middlesbrough’s 3-0 win over Coventry City, Joseph Desire Job started at forward for Boro before leaving in the 64th minute while Patrick Suffo came on as a sub at forward for Coventry in the 58th.

It was generally a quiet week for Cameroon’s players in France. Modeste Mbami started in a more offensive role in midfield for PSG in his club’s 1-1 tie with Auxerre. Mbami’s right wing cross led to PSG’s only goal of the game scored on a header by Pauleta. But Mbami was subbed out in the 67th minute, replaced by countryman Jean Hugues Ateba. Lille kept the pressure on league leaders Lyon with a 1-0 win over St. Etienne. Benoit Angbwa, at right back started for Lille and Jean Makoun came on as a second half sub in midfield. Benoit Assou Ekotto continued his strong play at left back for Lens as he went the whole match in his club’s 1-1 draw with Bordeaux. Patrick Leugueun was in defense as Istres held Nice 0-0 in a south of France derby and Jean Joel Perrier Doumbe was at right back for Rennes in their 1-1 tie with Caen.

Metz’ 2-0 win over Bastia saw Herve Tum at forward for Metz and Alexandre Song, at defensive midfield for Bastia, have discreet games. Tum was eventually subbed off in the 60th minute. Meanwhile in Toulouse’s 2-0 loss to Sochaux, Achille Emana entered as a sub in midfield in the 55th minute of the match.

In Ligue 2, Gilbert Bayiha in goal (Grenoble) and Thierry Gathuessi in central defense (Montpellier) started in their club’s scoreless draw. Eugene Ekobo in midfield helped his club Creteil beat Ligue 2 leaders Nancy 2-1. Martin Ekani of Angers played at centerback but his club was beaten 3-0 by LeMans. Both Stephane Biakolo (Niort) and Marcus Mokake (Sedan) came on as subs at forward at the start of the 2nd half but both of their clubs lost by big margins (Niort 1-4 v Amiens and Sedan 0-3 v Laval).

Bill Tchato started and played a solid 90 minutes at left back as Kaiserslautern moved off the bottom of the table in Germany with a 2-1 win over Arminia Bielefeld. In midweek Tchato came on as a sub at the start of the 2nd half at left back for Kaiserslautern in their 3-1 loss to Hannover. Raymond Kalla missed the weekend’s action, and may be out for several weeks more due to a muscle injury sustained midweek for Bochum in their 3-0 win over Monchengladbach. Kalla had to leave the midweek game in the 29th minute.

In Bundesliga 2, Francis Kioyo scored again for Rot Weiss Essen as they beat Saarbrucken 2-0. Cyrille Florent Bella came on as a sub at the start of the 2nd half for LR Ahlen in their 2-2 draw with Karlsruhe. Daniel Wansi played the first 45 minutes at right side midfield in Dynamo Dresden’s 2-0 loss to 1860 Munich.

Eric Matoukou sat out Racing Genk’s 1-0 win over St. Trond due to a suspension for last week’s red card but Justice Wamfor was in midfield for Genk. Samuel Ipoua also came on as a sub at forward for St. Trond in the 74th minute. Matthieu Assou Ekotto once agin was solid in midfield for La Louviere in his club’s 4-0 win over Mons. Patrice Noukeu was in midfield for Mouscron as his club lost 3-1 to Lierse. Aloys Nong started at forward for FC Brussels but his team was beaten by the “Ivorians” of Beveren 3-1.

In Greece, Pierre Ebede was in goal as Chalkidona held Ergotelis to a 1-1 tie. Guy Feutchine started at right back for PAOK Salonika but was subbed out in the 64th minute as his club was soundly beaten by Olympiakos 5-1. Midfielder Jean Denis Ouanga came on as a sub at the start of the 2nd half for Kallithea in their 3-1 win over OFI Crete.

Rigobert Song was solid in central defense as Galatasaray beat Sebatspor 2-0. Souleymanou Hamidou was effective in goal for Denizlispor as his club won 2-0 over Samsunspor and Herve Zengue was in midfield as his club Ankaragucu lost the Ankara derby to Ankaraspor 2-0.

Elsewhere in Europe the biggest news was Malmo winning the Swedish title for the first time since 1988. Jospeh Elanga was at lef back again for Malmo but his contract expires at the end of the calendar year and many clubs throughout Europe are interested in acquiring him. In the meantime Elanga and his teammates can celebrate their title victory as Malmo defeated Elfsborg 1-0. Combined with IFK Goteborg holding Halmstads to a 1-1 draw (with Cameroon’s Patrice Kwedi entering as a sub for Goteborg in the final minutes) Malmo ended up atop the Swedish standings with Halmstads 2nd and Goteborg 3rd. It’s worth noting that young left back/left side midfielder Kwedi seems to be held in high regard by Goteborg as he played in each of his club’s final 3 matches as they were battling for the league championship.

In Romania, Jeremie Njock returned to Universitatae Craiova’s lineup after missing several games due to a household injury. Njock scored the opening goal of the game in the 70th minute as Universitatae Craiova defeated Rapid Bucharest 2-0. In the Czech Republic, Patrice Abanda was in central defense for Drnovice as they drew 1-1 with Slovan Liberec. Pierre Boya entered as a sub at forward for Partizan Belgrade in his club’s 1-0 win over Vojvodina. In Israel, Emile Mbamba started at forward but was subbed out after 66 minutes as his club Maccabi Tel Aviv were beaten 2-0 by Beitar Jerusalem. Aaron Nguimbat started at centerback for Latvia’s Skonto Riga in their 3-2 win over Liepajas Metalurgs while in Ukraine Patrick Ebanda was the defensive midfielder for Arsenal Kyiv in their 5-2 win over Illichevits. In Switzerland, Armand Deumi was at centerback for FC Thun as his club was defeated 2-1 by Young Boys Berne while Augustine Simo started in midfield but left after 36 minutes as Aarau were beaten 1-0 by Servette Geneva.