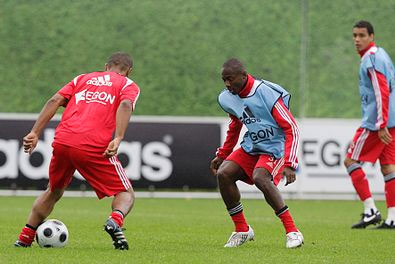 Eyong Enoh training with his new team. The midfielder signs a contract in Amsterdam to 1 July 2010.

The 22-year-old, who made 32 appearances for the Urban Warriors last season, was born in Cameroon and was one of the outstanding players in the Absa Premiership last season, winning a nomination for Player of the Season.

Speaking in an interview with KickOff.com, he could barely hold back his excitement about his break in Europe.

“This is what I was dreaming since growing up in my country that one day I want to see myself playing in Europe and now I am happy that my dream has finally come true,” he says. “I have since signed for two years with Ajax Amsterdam and want to use this opportunity of playing in Holland to get into Cameroon national team.”

“He is a nice and open-minded person. He was one of the best players for Holland and I hope to learn a lot from his experience as a player.”

He also had trials with Maccaibi Haifa in Israel and Portmouth in England. Pompey manager Harry Redknapp was said to be quite keen on the player, but work permit issues stalled a move.

“He won’t get into the country unfortunately,” Redknapp told the club’s official website. “To get into England you need to have played 75% of the recent games for your country and I am sure he hasn’t done that.”

Ajax Amsterdam have an option to extend his deal for another two seasons.

1. Eyong Enoh training with his new team. The midfielder signs a contract in Amsterdam to 1 July 2010.