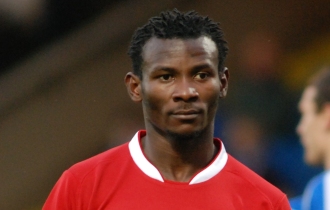 Crawley manager Steve Evans is pleased to have signed former Portsmouth striker Berlin Nlome-Ndebi. Berlin Nlome-Ndebi, 20, is a Cameroon born striker with Belgium citizenship and has signed a short term contract with the club.

Berlin joins the Crawley “Reds” from Premiership side Portsmouth and has also had a spell with Belgium club KVC Westerlo.

Evans said on his latest recruit: “I first became aware last season of Berlin when I watched Portsmouth’s reserves on a number of occasions. Portsmouth’s reserve manager, Joe Jordan, is an old football friend of mine and was set to sign him on loan for Boston, but we owed Pompey previous money and the deal could not go out.

“So far he has been excellent in training and although he did not have much time on Saturday I thought he came on and worked hard for the team, created a couple of good chances for others and I am sure he will prove to be a good signing.”