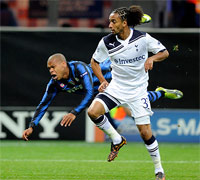 Benoit Assou-Ekotto feels playing regularly was the biggest factor in another super-consistent season.

He was the only player to start all 12 of our matches in the Champions League and only Luka Modric made more starts in the Premier League. Luka started 32 times, Benoit and Heurelho Gomes 30 each.

“I played a lot of games, 45 and I think I played well,” reflected a typically-modest Benoit.

“When you play one game and do it well, it gives you confidence for the next game. After 10 you have even more confidence and that’s good for the whole season.

“It was a great experience, especially the Champions League. We finished in the last eight. For the first time (in the competition), that was great.”

Harry Redknapp is a huge fan of the Cameroon international. “He’s one of the best left-backs around,” said the manager.

“He’s quick, strong, aggressive and has amazing ability. His body strength is unbelievable. You watch when he goes for a 50-50, players bounce off him.

“There aren’t many better than him, for sure and you certainly wouldn’t want to play against him.”