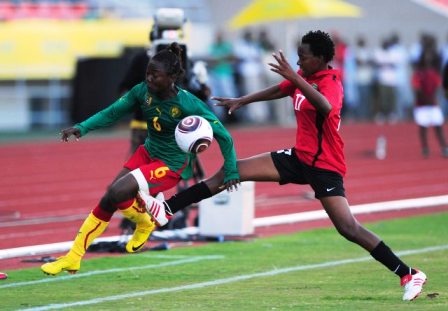 The Cameroon women’s team started their All Africa Games campaign with an unconvincing 1-0 win over hosts Mozambique as the tournament got underway on Sunday afternoon.

The sparse crowd at the newly built National Stadium in Maputo were treated to a fine defensive performance from the home that were not overshadowed by their more fancied opponents.

Cameroon took control of the match in the opening exchanges, dominating the midfield through Josephine Bella and Francine Zouga but strikers Iven Mihamle and Raissa Feudjio were guilty of missing three clear-cut chances created by the twin playmakers.

In the15th minute, against the run of play, the home side nearly took the lead when Maria Mutola beat the offside trap. The former athletic star and inspirational captain rounded the out-coming keeper, Anette Ngo Ndom, but her shot was cleared off the line.

Cameroon counter attacked immediately and took the lead a minute later when Zouga sent a scorching shot into the top corner of Ana Chirindza’s net after Mihamle had created space for her in the 18-yard area.

Cameroon maintained the pressure on the Mozambique defence through winger Gabrielle Aboudi, who tormented her opponent’s left-hand flank. She was unlucky not to double the lead when her first time shot hit the upright in the 29th minute.

But for all the pressure Cameroon could not extend the lead and took an uncomfortable 1-0 advantage into half time.

Mozambique’s defence, so shaky in the first period, was transformed during the break and some heroic performances from the back four and keeper Chirindza, kept the charging Cameroon attack at bay in the second half

Even the sending off of Amelia Banze in he 67th minute for a late challenge on Claudine Meffometou did not change the pattern of the match.

The frustration in the Cameroon team was tangible and their dominance faded in the latter stages of the match as Mutola began seeing more and more of the ball.

But with a player short Mozambique could not make not make their newfound possession count and the match ended with neither team on top.

It was a fantastic performance from the home team, who felt they could have got a point from the match.

With Guinea having withdrawn from the competition, Mozambique will be confident of beating Algeria in their final group match next weekend and securing a place in the quarterfinals.

Cameroon on the other hand will need a much better performance against the North Africans on Wednesday if they are to gain a place in the last four.

1. The Cameroon women’s team started their All Africa Games campaign with an unconvincing 1-0 win over hosts Mozambique