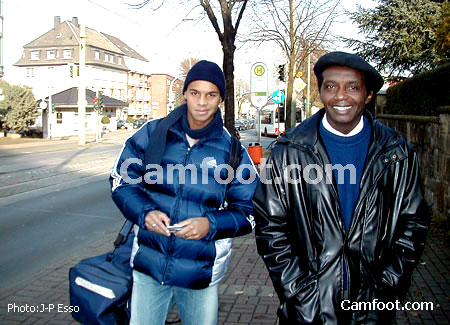 Marvin Matip and his dad, Jean, in Bochum.

German-born Marvin Matip’s hopes of playing for Cameroon have had to be postponed.

Matip, who plays for German side FC Koln, has a Cameroonian father and a German mother and was included in the Indomitable Lions’ 20-man squad to face Liberia in a 2008 African Cup of Nations qualifier on 3 June.

But his name had to be taken off the list when the Cameroon Football Federation (Fecafoot) pointed out to caretaker coach Jules Nyongha that it had not officially requested Fifa to allow Matip to play for Cameroon.

The 21-year-old has already played for Germany at under-20 level and therefore Fecafoot must apply to world football’s governing body, Fifa, to allow Matip to switch allegiances.

Nyongha has called Andre Bikey, who plays for English Premiership side Reading, into the squad to replace Matip.

Modest Mbami of French side Marseille has been included in a Cameroon squad for the first time since 2004.

The team begin training in Belgium on 28 May before flying to Monrovia on 1 June for the qualifier against Liberia.

1. Marvin Matip and his dad, Jean, in Bochum.