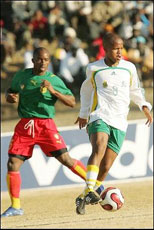 Johannesburg – South Africa’s under-23 soccer team have found themselves staring down a barrel after losing 3-2 to a more forceful and professional Cameroon in the Sasol Eight Nations game at a murky Meadowlands Stadium.

Amaglug-glug are now facing the stark reality of being blown out of the tournament in the opening round.

In a nutshell, the garish, mainly directionless Amaglug-glug are no longer the masters of their own fate going into the final group game against Botswana on Sunday, knowing that even a victory will not necessarily assure them a place in the semi-finals.

It was widely assessed by the pundits in pre-tournament predictions that South Africa, Cameroon and China would battle it out for the two semi-final places earmarked from their group, with minnows Botswana no more than making up the numbers.

Instead, Botswana have left their more fancied rivals red-faced and remorseful after shading Cameroon 1-0 and then bludgeoning China 4-0 on Thursday to assure a semifinal berth – while the three other teams in the group must now battle for the one remaining semi-final berth open to them.

Certainly, the team which coach Steve Komphela suggested was geared for “payback time” after losing last year’s final to China, may instead be paying the price of excessive showmanship and lack of cohesion in their ranks.

Cameroon, for their part, showed the South Africans the way to goal by taking the lead on three occasions on Friday, with Amaglug-glug clawing back to equalise twice with some semblance of good fortune.

But they finally capitulated when the barnstorming Christian Bekamenka scored his second goal of the game in the 74th minute to give the “junior” Indomitable Lions a deserved victory.

Cameroon showed their mettle from virtually the kick-off and were unlucky when two scoring attempts in the first 15 minutes struck the woodwork. But “The Young Lions” were not to be denied and burly Guy Roger Toindouba muscled a powerful drive into the corner of the net for the opening goal in the 35th minute.

Confusion in the Cameroon defence in the 42nd minute culminated with goalkeeper Patrick Tikyem palming the ball into his own net to make the score 1-1, with Bekamenka providing the first of his two ferocious goals to make the score 2-1 at the interval.

Bongani Mbhele produced a second equaliser for Amaglug-glug in the 67th minute with a coolly-taken goal through a packed penalty area. But ultimately there was no stopping Bekamenka or Cameroon – in spite of the heroics by Senzo Meyiwa in the Amaglug-glug goal.