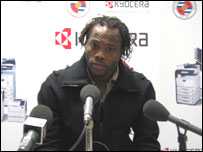 Bikey says Cameroon have what is needed to become champions
Cameroon’s Andre Bikey says the Indomitable Lions can win the African Cup of Nations now that striker Samuel Eto’o is fit again.

The defender, who plays for English Premier League side Reading, says the Barcelona forward is a talisman.

“Samuel Eto’o is very important for Cameroon because no other striker creates chances like (Eto’o) does.

The 22-year-old added: “We’ve got a great opportunity to win as (the squad) has everything; I can’t wait to play.”

Bikey signed a three-year contract with the Royals in April 2007 after impressing manager Steve Coppell during last season’s loan spell.

The defender has played a bit-part for his club so far this term, but Bikey maintains it is always hard to leave at this stage of the season.

“I’m ready for the Cup of Nations though it is difficult to leave my obligations with Reading.

“I have a contract with Reading which I appreciate, but my country will always come first.”

Bikey left Cameroon when he was 15 to pursue his career in football, and has been back rarely since.

However, this has not diminished his love of playing for the Indomitable Lions.

“I left the country when I was very young but that’s why it is so important for me to play for my country, the nation where I was born.

“All my family are there, my father and all of my brothers, and it will make me happy to make them proud.”

“I enjoyed playing in different countries, you see different cultures and these different experiences are good for your life.

“In Russia I played Champions League football for the first time, though I learnt there is not so much respect for African players there.

“I enjoy football here (in England), it’s one of the best leagues in the world and I am on a good contract; what more can I ask for?”