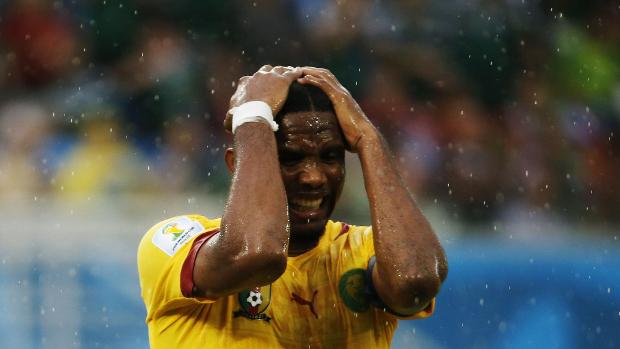 Cameroon’s next generation of forwards can shine in the absence of Samuel Eto’o, says ex-player Patrick Mboma.

“Because of the great player he was, I will not say it’s a good thing that Samuel left,” Mboma told BBC Sport.

“But since his retirement, Eric-Maxim Choupo-Moting and Vincent Aboubakar have started to show the world they are good quality players.”

Mboma was making his comments despite his beliefs that the Everton striker is one of the greatest African footballers to have ever played the game.

Porto striker Aboubakar started two games at June’s World Cup in Brazil but failed to score during Cameroon’s torrid campaign. The Indomitable Lions lost all three games, scoring once while conceding nine, including the 4-0 defeat by Croatia.

In his last two internationals, the 22-year-old has hit three goals as his side beat DR Congo 2-0 before thrashing Yaya Toure’s Ivory Coast 4-1 to take control of their 2015 Africa Cup of Nations qualifying group.

Choupo-Moting – who has 12 goals in 29 caps – has made a decent start with Bundesliga side Schalke 04, scoring three times in their opening seven league games.

“It’s hard to say but I have to be honest,” said Mboma, who won two Nations Cup titles and an Olympic gold between 2000-2002 while partnering Eto’o in Cameroon’s attack.

“I was saying during the last one-to-two years that for players like Choupo-Moting and Aboubakar, it would be very, very difficult to be themselves with Eto’o.”

“It’s not that Samuel didn’t want them to play well, it’s just he had such a big name. I think they have a lot of potential. For them, his retirement can be an important change.”

Lyon youngster Clinton N’Jie is another Cameroon striker to have profited from the absence of Eto’o, the only man to have been crowned African Footballer of the Year on four occasions.

The 21-year-old has netted three goals in his first two internationals; but it is Aboubakar who Mboma tips as the man most likely to fill Eto’o’s boots.

He joined Portuguese side Porto in August after a successful season with French outfit Lorient, where his 16 league goals were only bettered by Paris St-Germain’s Zlatan Ibrahimovic.

“I believe in Vincent Aboubakar a lot,” said Mboma, who scored 33 goals for Cameroon.

“He works very hard and is a rough diamond who needs to be polished. If he can find a good coach and/or a good club, he has the possibility of becoming the greatest Cameroon forward since Samuel himself.”

Mboma, who counts PSG, Cagliari, Gamba Osaka and Sunderland among his former clubs, quit international football in 2004 before retiring altogether the following year.