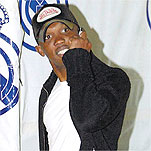 Paris Saint Germain are drawing up a list of targets as they seek to bring a new striker to the French capital.
The French giants are keen to bolster their attacking options for next season with doubts regarding the future of Pauleta. The former Bordeaux ace has been linked with a move to his native Portugal and PSG are keeping tabs on a number of possible replacements.

PSG and are believed to be keen on Real Mallorca star Samuel Eto’o, but they could face competition from Marseille for the Cameroon international.

Eto’o seems set to leave Mallorca in the summer after a disappointing season at Son Moix and there are a number of clubs weighing up a move for the skilful hit-man.

Marseille are looking for a partner for star striker Didier Drogba and Eto’o is believed to be on their wanted list.

Barcelona are also keen on the former Real Madrid star and will try to keep him in Spain.

Marseille are set to be busy in the transfer market over the summer and they are believed to have Milan’s Jon Dahl Tomasson, Sochaux’s Pierre-Alain Frau and Lens’ Daniel Moreira among their list of targets should they miss out on Eto’o.