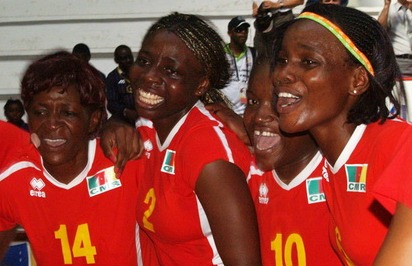 Algeria stated the match more disciplined in defense while Cameroon team was suffering the lack of concentration after the great Marathon they played against Kenya yesterday. The Algerian setter Fatima Zahra used her combinations to deceive the Cameroonian blockers as she set to the opposite Zohra Bensalem and the middle blocker Lydia Olumou to lead widely 8-3 at the first TTO. With Cameroon poor reception Algeria went through to win the set easily 25-14.

The second set was different as Cameroon adjusted their block through Boum Ngo and Roline Tatchou to lead 4-0 and 8-2 at the first TTO. Algeria again regained their pace and succeeded to arrange the block of Olumou and Mouni Abdrrahim to decrease the point deficit gradually till they draw for the first time 20-20 and through a service from Faiza Tsabet they led for the first time 21-20. With the experience of Tsabet and Zahra Algeria succeeded to win the critical points at the end of the set to win narrowly 25-23.

The Cameroonian performance raised to the top in the third set as they arranged their combinations through the setter Tatiana Baran and the attackers Rose Rebecca and Roline to come back after the first TTO. The Algerian reception showed temporary disturbance that allowed Cameroon to continue leading till they won the set 25-18.

With the marvelous performance of the left attacker Faiza Tsabet Algeria went easily through to win the fourth set 25-14 after she sent her razor sharp hits from all the net positions allowing her team to win 3-1 and the gold medals.