Gov’t to Construct Stadia Across the Country 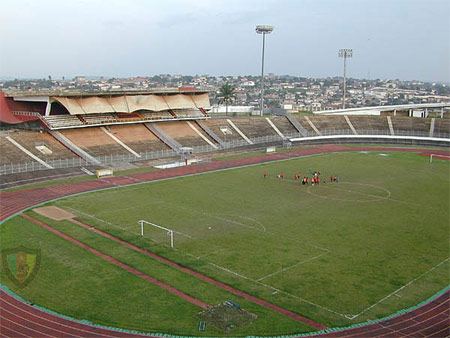 The announcement was made yesterday by the Minister of Sports and Physical Education during the signing of a contract to put chairs at the Ahmadou Ahidjo stadium.

The Minister of Sports and Physical Education, Augustin Thierry Edjoa, has announced an ambitious project to equip Cameroon with befitting sports infrastructure worthy of a great sports nation like Cameroon. The Minister was speaking in the conference hall of his ministry during the signing ceremony of a contract with a private business firm, Cam Conseil, to equip the Ahmadou Ahidjo stadium with chairs. “We are not going to end only at renovating and putting seats in stadiums,” he said. “We will construct new stadiums and sports complexes like the Chinese sports complex under construction,” he affirmed.

The minister announced the imminent arrival of some Chinese businessmen for talks on the construction of a second stadium in Olembe-Yaounde, christened “Paul Biya stadium” and also the construction of a sports complex at the higher institute of Youth and Sports, INJS. He said the process of equipping stadiums with seats will continue and that the government will be putting up 60 playing grounds every year. The BOT (build operate and transfer) contract with Cam Conseil, he said was the beginning of public/private sector cooperation in this vast enterprise of constructing sports infrastructure in Cameroon.

According to the contract of obligation and exchange of service, Cam Conseil will put 40.000 chairs at the Ahmadou Ahidjo stadium and benefit from the rights of images for four years. During these four years, any chairs damaged from natural courses will be replaced by the company which will recover the cost of its investment from publicity messages on the seats. The General Manager of Cam Conseil, Alain Paez says the project will cost from CFA 250m to 300million and that he has already targeted about fourteen Cameroonian companies which could advertise on the chairs.

It is worthy to note that the putting of chairs falls within the general renovation of the Ahmadou Ahidjo stadium financed to the tune of 1.3 billion by the Japanese government. The replacement of the green tuff and repairs on the edifice was confided to a Japanese company, Nissoken Architects Engineering Company. When completed, the stadium will be equipped with public toilets, a refurbished press cabin and electronic signalling boards. The president of the African Olympic and Sports committee, Col. Kalkaba Malboum, has also promised to replace the material on the athletic track of the stadium. Work on the stadium is expected to end by October 2007 but the stadium will only be opened to the public in December.