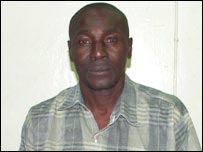 Irate Liberian football fans have threatened the life of the Lone Star coach, Frank Jericho Nagbe, after he left out several overseas-based players from his latest squad.

Liberia are preparing to host Cameroon in a Group Five 2008 African Cup of Nations qualifier on Sunday.

The coach’s home was besieged overnight by furious fans threatening to burn it down, as he was forced to abandon the Lone Star’s training camp in Monrovia to be with his family.

“My life is being threatened and I will have to resign if I do not get the security guarantees from the government,” Nagbe told a local radio station.

The coach has refused to return to the training camp even though police have now cordoned off his home in order to protect his family.

The fans are criticizing Nagbe’s squad as being too inexperience and immature to encounter the highly-rated Cameroonians.

They want the inclusion of the likes of the Greek-based Kelvin Sebwe and Oliver Makor as well as goalie Loius Crayton, who plies his trade in Switzerland.

But Nagbe has continued to insist that these players do not fit into his plan for Sunday’s encounter.

“I have not dropped these players from the team, but this time around they just don’t fit into my game plan,” he explained.

Even the Liberian President, Ellen Johnson-Sirleaf, has taken an interest in the row and made an impromptu visit to the team’s training session on Friday morning.

“I am very concerned about the unfolding events so I have come to get a first hand understanding of what is happening,” she told the frightened players.

“We do not want any violence that would lead to our suspension from international football so we will be meeting with the coach and others concern to see how we can handle this crisis.”