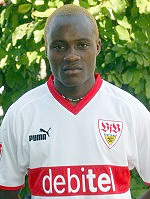 Cameroon midfielder Serge Branco has agreed a one-year contract at Leeds United, reports BBC Radio Leeds. The 23-year-old former Eintracht Frankfurt and Vfb Stuttgart player, who is out of contract, has been on trial at Elland Road and will not cost a fee.

But he has not received international clearance in time to face Nottingham Forest in the Championship on Saturday.

Manager Kevin Blackwell told Leeds’ website: “He brings real quality to the squad at the time when we need it.”

In addition to Branco’s one-year deal, the Yorkshire club also have an option to keep him for a further year at Elland Road.

He won a gold medal with the Cameroon side at the Sydney Olympics in 2000, and also trained with Championship rivals Queens Park Rangers this summer.