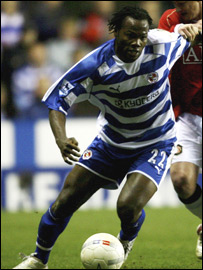 But what the Cameroon defender likes most about life in England is not feeling the need to carry a gun for his own protection from racist thugs, as he did while living in the Russian capital.

Bikey has played a key role in helping turn Reading into surprise candidates for a Uefa Cup place in their first season in England’s top-flight.

Now, the former Espanyol centre back is hoping his performances will persuade manager Steve Coppell to take up the option of a permanent US$3m deal that would allow him to turn his back on Moscow for good.

“I still have three years left on my contract with Lokomotiv but I don’t want to go back there,” Bikey said.

“I’m happy at Reading and want to stay long-term.”

“There’s a different mentality living in Russia and it’s very hard to live there being black. I have a gun for protection. You can get hurt out there.

“I nearly got badly injured once when three men followed me but I ran away and got into a taxi.

“Friends of mine have been attacked in the street. It can be a very frightening place to live.”

In contrast, Bikey and his Portuguese wife have settled quickly in Reading, a fast-growing town an hour to the west of London, and he feels equally at home on the pitch.

“The Premiership is much more physical than anywhere I have played before,” he said.

“You can go in hard on opponents without giving away a free kick every time you make a tackle.

“The games are much more exciting and every week you are playing in front of packed stadiums.

“In the past I have not stayed anywhere very long. I played in Spain for Espanyol for one year and then moved to Portugal for six months.

“I have played in Russia for the last couple of years but this is the best football I have played.

“I love the English people and I love their humour. In Russia people take themselves too seriously but over here you are encouraged to laugh.

“I have always enjoyed watching English comedy programmes on TV – Mr Bean is the best. He is a crazy man. I bought the DVD as soon as I came to Reading and watch it every day after training.

“I love the food too. I had never had fish and chips before I came but now I eat them all the time.

“I have always enjoyed watching English comedy programmes on TV – Mr Bean is the best. He is a crazy man.

“Reading feels like home. At the moment I am only on loan but I would love to stay for good.”

Still only 22, Bikey has set his sights on emulating the achievements of the likes of Didier Drogba.

But he very nearly missed out on the chance to make an impression on Coppell.

Bikey was sent off for head butting an opponent during Reading’s pre-season tour of Sweden, when he was still on trial.

Bikey recalled: “What I did in Sweden was stupid and had it not happened I would have signed full-time.

“Thankfully the manager gave me another chance and hopefully I am rewarding him with my performances.

“Reading are a great club and at the start of the season we just wanted to stay in the Premiership. Now we are safe for next season the objective is to get more.

“It would be fantastic for the club in the first season in the Premiership to make Europe and that is what we are striving for.”

The tough-tackler is also hoping he will soon be flexing his muscles in the Cameroon national side.

He was forced to miss their latest African Nations Cup qualifying games because his work visa had expired.

“That was unfortunate but there will be other opportunities to play for my country,” he said. “I spoke to the manager and he was very understanding.

“It has always been my ambition to play for Cameroon and moving to England has helped raise my profile in the national team.

“We have a lot of players to chose from so you have to be playing regularly in one of the major leagues to get noticed. That is extra motivation for me to do well with Reading.”